Within the research and development effort, MIRACLE LINUX has developed parallel algorithms that work within an FPGA and a framework for efficiently transferring data between the host computer and the FPGA via PCI Express interface, to increase the speed of string tokenization, one of the most basic features of text processing. Increases in speed were successfully achieved at up to ten times the speed recorded for CPU use alone, as a result of benchmarking with these two new features that assumed the batch processing of large amounts of text logs.

Background for the Current Research and Development

Processing a flood of data from both devices and gateways for the Internet of Things (IoT) has become an issue as data volumes increase and the practical uses for the IoT rapidly expand. MIRACLE LINUX has been focusing on the acceleration of string tokenization, using FPGAs in IoT gateways and data center servers. This effort was based in MIRACLE LINUX's technical prowess in developing and supporting operating systems, given our knowledge of the hardware environment.

It is anticipated that FPGAs will have a wide variety of applications within enterprise systems. Altera, a leading company in the FPGA field, has become an Intel subsidiary, and Intel has announced plans to offer Altera's FPGA products with Intel® Xeon® processors as highly customized, integrated products. There remain significant barriers for ordinary users to adopt FPGA use: FPGA circuit designs not only require knowledge of digital circuits and a broad, deep knowledge of things like system buses and operating systems, but also considerable modification to the architecture would be required so that existing applications can utilize FPGA.

MIRACLE LINUX conceived a solution for these issues through offering an operating system to transparently use FPGAs from basic libraries, like the GNU C Library.

Off-loading1 the Linux OS core libraries onto FPGAs enables applications to transparently use FPGAs. MIRACLE LINUX performed benchmark testing, assuming the batch processing of large amounts of text logs and the running of functionality equivalent to that of the strtok function 2 in the C programming language, using an FPGA.

Processing speeds for the CPU (Intel Core i7-4790 3.6GHz) increased up to approximately 1000% as a result of off-loading string tokenization to FPGAs. Processing times remained nearly fixed for data volumes up to several kilobytes due to a transfer overhead, and were longer than those for the CPU. When the data volume increased beyond one megabyte, however, processing speeds were approximately ten times faster when compared to CPU processing. 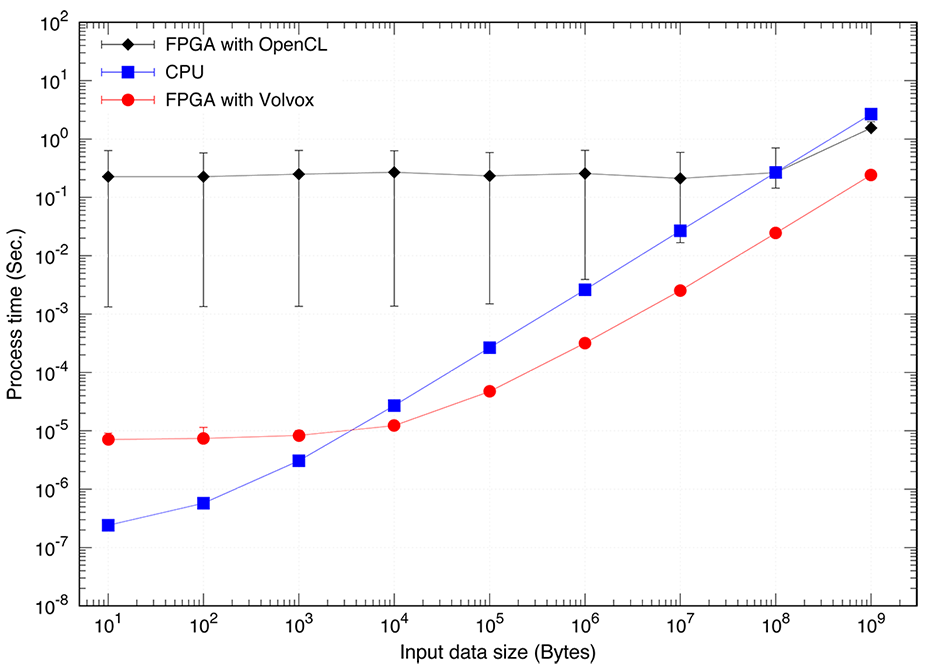 These results indicate that the processing of large amounts of data, including string parsing with Hadoop for example, will be effective when using this technology developed by MIRACLE LINUX. This technology speeds up the processing itself as well as the overall system, owing to the decrease of CPU loads.

This technology, using FPGAs transparently inside the operating system and keeping library APIs compatible, allows applications to be used as is.

MIRACLE LINUX is going to study the use of FPGAs for string processing functionality that many programming languages and libraries support, including tasks like converting characters into numeric values, converting between cases, and partial searching, for further efficient processing in combined with the string tokenization feature in an FPGA. Future plans include using FPGAs for other functions such as encryption, and compression and expansion.

MIRACLE LINUX will advance the use of FPGAs in the enterprise field by accelerating Linux applications without modification, to support the needs of processing capacity as IoT devices proliferate and the integration of FPGAs into Intel processors.

*1: Off-loading refers to improving overall system processing performance by embedding hardware to process specific types of data into computers as a means to lower CPU loads. In this instance, FPGAs take on some processing work for the CPU.

*2: strtok is a function in the C programming language for parsing strings using delimiter characters to create tokens.

MIRACLE LINUX offers an enterprise Linux OS, using technologies and services at a Japanese level of quality, that can be utilized in any environment: on-premise, cloud, or embedded. Not only has MIRACLE LINUX built an impressive track record in a wide variety of enterprise systems, including telecoms, public utilities, and financial institutions, our Linux kernel technology has been applied in a multitude of fields. MIRACLE LINUX is also extending our embedded Linux OS offerings in many different specialized equipment, including car navigation, vending machines, medical terminals, and image distribution equipment, as well as digital signage players.
MIRACLE LINUX is also actively involved in vitalizing the use of open-source solutions through the development of integrated monitoring tools and backup software for businesses, based in open-source projects, the development of integrated operating software, and releasing those projects as open-source to the community.